February is American Heart Month. Heart disease is the leading cause of death for both men and women in the United States, but it is preventable and controllable. Take steps this month to keep your heart healthy.

The following post contains information from the American Heart Association.

Marc Anthony Bynum knows first-hand the dangers of stroke: his grandmother, mother and aunt all suffered strokes. He’s learned to heed these warning signs by making a career out of healthy cooking and eating.

Bynum, 34, is a self-taught chef who was born and raised on Long Island. He worked his way into some of the top restaurants in New York and later appeared on the Food Network show Chopped, winning two episodes before coming up short in the show’s 2010 season finale.

Bynum, who now runs his own hospitality company in addition to cooking, grew up in a family where cooking and food was the center of life. That’s what inspired him to cook professionally, he said.

There was just one problem. Traditional family favorites like sweet potato casserole were loaded with unhealthy items like lard, bacon and salt.

That’s when Bynum decided to devote his culinary skills to more than his customer’s dinner plates. As an American Heart Association spokesman, he’s now on a mission to educate a new generation of children about the dangers of obesity, a risk factor for heart diseases and stroke, as well as the simple pleasures that can come from growing and eating your own food.

“It’s as simple as putting down that bag of chips and picking up that apple,” he said. “You put sugar in a gas tank and it won’t work right. But there’s such a lack of understanding about what we put into our bodies. People literally perish for a lack of knowledge.” 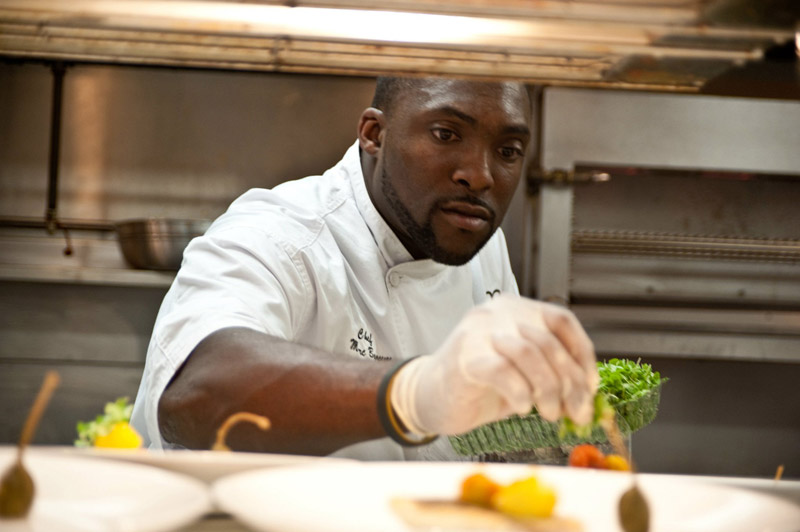 Bynum often speaks to children about the perils of junk food and the importance of eating fruits and vegetables. He’s developing an urban garden in Long Island that will serve as an educational training ground for children in the area.  But he said the most important healthy eating training ground for kids is at home with their parents.

Along with his wife and two sons, Bynum said he buys fresh food grown locally and they often prepare meals as a family from scratch.

“It really pays off to get the kids involved and cook at home,” he said. “It may take more time, but it’s the only way to know exactly what is going into your body. You have to weigh the cost of convenience versus the cost to your health.”

Read more stories like Bynum’s and other heart-healthy tips and recipes on the American Heart Association’s blog.