While Monica could not control the water steadily rising in her home, as a nurse manager, caring for her patients and staff during this time gave Monica purpose.

Flooding is not anything new to local Louisianans, Monica and her husband. “My husband and I were raised in flood zones,” Monica began. “At 50 years old, I have grown accustomed to sandbagging my house, and my husband has as well. None of that was new to us.” Monica and her husband started preparing their home for the presumed flood early Saturday morning.

Monica went into work on Sunday, knowing quite well the potential of her home flooding. She was shocked to realize that almost 50 percent of the staff at Woman’s had been affected, and were not able to come into work. Monica and a few members of her staff spent well into Sunday night making preparations for the unknown to come on Monday. They had to call doctors, nurses and patients, attempting to make arrangements for surgeries, inductions and other appointments. However, the phone lines and cell service was down, so their only form of communication was through text. Monica was also in charge of finding extra accommodation for patients who couldn’t be discharged due to the flooding, and staff who were staying overnight to cover coworkers’ shifts. “Few people did the jobs of many,” Monica said. “In every department I encountered, housekeeping, dietary, lab, everyone pulled together to get the job done.”

Although Monica was prepared and had been through similar situations countless times before, She admits she was just as anxious as everyone else.

“Memories of Katrina were coming up, too. We worked in the hospital then as well, and there were hospitals in New Orleans that got water and had to be evacuated. So many people died, and you sort of let that sneak in a little bit as well as you plan for the worst. It was a really scary time. We have a beautiful hospital with nice, big windows, but as we looked out and watched the waters rising so quickly… and then there were no cars anywhere, and then over several days it developed to wall to wall headlights as far as you can see in every direction of people trying to evacuate.”

Monica’s husband continued to inform her of what was going on at home while she was at work. Their home had flooded, and his parents, who had lived in the same house since the 70’s, ended up taking on five feet of water altogether. Monica’s husband and his family went to stay with his aunt and uncle until they could find more permanent housing.

Monica left work on Tuesday afternoon with the hopes of being able to go and see the extent of the damage to her house. However, she was not able to get into her home until Saturday since the water was still all the way up to the house. Monica and her husband tried to start getting things out of their home on Saturday, which had made it a week at this point since the flood, but it was still very unsafe. They had to park the car up the road, and then wade through the water to get to the house.

“The one thing that impressed me the most throughout this experience is the outpouring of generosity from people,” Monica said. “From every walk and aspect of life, the community came together, and helped each other through this difficult time.”

Monica shared a story of the generosity she experienced from her community. Her and her husband have chickens, and after hearing about the potential flood on Saturday, they opened the gate to the chicken yard so the chickens could make it safely to the perch in case the waters rose. On Tuesday, Monica received a text from her neighbor, who was going through her neighborhood on a boat checking on everyone’s homes. In the text he sent a picture of himself, in his boat in Monica’s chicken yard, with the tin roof pulled back, because the water had risen to the roof, and her chickens were safely perched all over the sides of his boat. 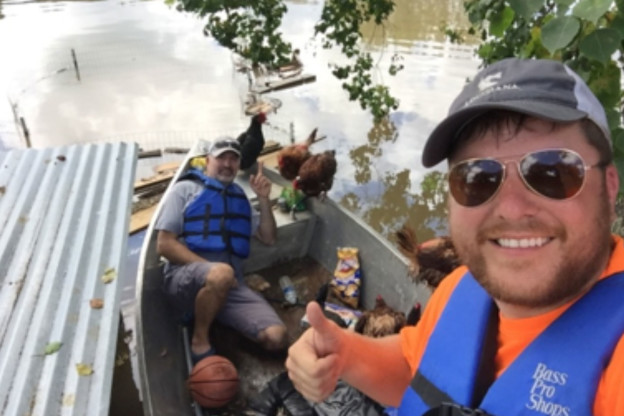 “The material possessions are one thing, the memories our home held are another, and the chickens might be minor to some people, but for me it gave me a renewed sense of okay, things can be saved, and we are going to be ok.”

Twenty percent of Monica’s staff at Woman’s was affected to the point of losing their homes. Not only is it her job, but Monica is a natural caregiver. Being able to take care of others throughout this troubling time, but at the same time being taken care of by others, has been a rewarding and humbling experience for Monica.

“It is sad to think that there are so many people who are not going to be the same for a very long time. This is why I appeal to those in healthcare, who have a sense of care giving in their hearts, to consider helping in another healthcare organization or community. We are the ones who have to take care of the people out there who are suffering. The stronger we can be, the more we can help.”