It’s not uncommon to experience uncomfortable symptoms throughout pregnancy. One Michigan woman was fully aware of this and quickly disregarded the discomfort from a strange itch that began around 32 weeks of pregnancy.

At first, Christina DePino thought the itching was nothing out of the ordinary and concluded it was due to all of the skin stretching combined with the climate change from her family’s recent move from Denham Springs, Louisiana to Monroe, Michigan. But with the passing weeks, the itching continued. Like many her age, she went to Facebook, posting a status asking for counsel from her peers. With mixed advice, many saying itching wasn’t uncommon during pregnancy, it was comments by two friends that caught Christina’s attention.

“At first I started thinking the itching wasn’t anything serious based on what others were saying, but then a friend of mine mentioned a condition called ICP and another replied to say it was a serious condition and that I need to talk to my doctor,” Christina says. “I considered the possibility briefly, but as comments continued, I thought little of it and just wrote it off as normal.”

After roughly two weeks, the itching intensified, with it being most extreme in the palms of her hands and soles of her feet. As it got worse, Christina began losing sleep and finding it hard to be comfortable at all. One late night, she went back to Facebook, seeking answers again. Her post stated “itching is so bad! I just want to peel my skin off!” She soon received a response from her sister-in-law, a nurse, who mentioned she should research cholestasis of pregnancy (ICP).

At 36 weeks, armed with a little research, Christina contacted her doctor. Following a series of blood tests to check liver function, she was officially diagnosed with ICP.

Christina’s doctor was thorough regarding the condition and the concerns that lie ahead.

“My doctor explained that while not all the reasons are understood, patients with ICP are at very high risks of having a stillborn at and following 37 weeks,” she says.

Dr. Cliff Moore, Maternal-Fetal Medicine Specialist at Woman’s, explains the condition: “During pregnancy, multiple changes occur to a woman’s body in preparation for delivery.  Many she can see and feel, such as skin and joint changes; however, most she cannot see or feel, such as changes in her heart, liver and kidney function.”

“The mother’s liver in pregnancy has two roles. One is to keep the mom’s blood clean and the other is to make blood clotting factors to prepare the mother’s body for delivery. The blood clotting factors are increased secondary to a hormone called estrogen, which rises in pregnancy.  Some patients’ livers respond differently to the rise in estrogen and are not able to keep the blood clean. This leads to a buildup of a waste product in the mom’s blood stream called bile acids. This buildup of bile acids in the body is irritating to the maternal skin and thus causes the mother to itch quite significantly. Though not completely understood, this buildup of bile acids can lead to fetal death,” he added.

Given the risks, Christina and her husband, Aaron, opted for an induction.

Doctors carefully monitored the induction process, which allowed Christina to give birth naturally to a beautiful, healthy baby girl. 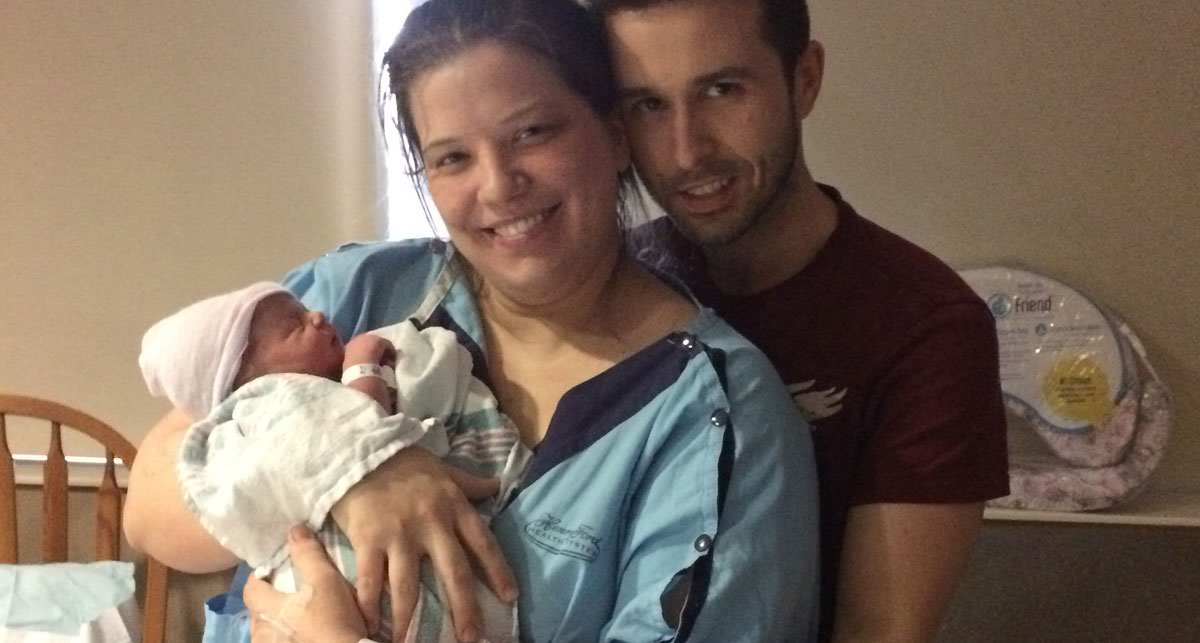 While the couple was thrilled, they couldn’t help but think about all the things that could’ve gone wrong. So they decided to share the pregnancy scare on Facebook to warn other expecting mothers about ICP.

“If you’re pregnant and you’re itching REALLY bad, don’t ignore it!” Christina warned in a post that has since gone viral with more than 21,000 shares.

While considered a rare condition, Dr. Moore say symptoms are not something to brush off.

“Almost all women have changes in their skin during pregnancy. Some get rashes and others may note increased darkening/pigmentation,” Moore states. “The key behind ICP is the persistent itching. Most women with ICP complain of inability to sleep because the itching is so bad. If you note that you just can’t get comfortable because you keep itching all over, alert you doctor and he or she will check your blood for increased bile acids.”

Christina and Dr. Moore urge others who may suffer from severe itching to be their own advocate, know the signs, be smart and ask questions.

“Don’t ignore the itch; a simple blood test could save your baby’s life! It saved mine!” Christina says.