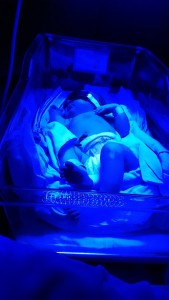 Both my daughters had jaundice, a condition in which the baby’s blood contains too much bilirubin and makes her skin and eyes appear yellow. My older daughter’s jaundice resolved itself on its own, but my younger daughter born at the end of March had a more severe case. She had a lot of risk factors – exclusively breastfed, larger baby (born 10 lbs, 8 oz.) and our blood types were incompatible, which seemed to be the thing that worried the pediatrician the most.

Babies are tested for jaundice 36 hours after being born or sooner if they look yellow. I thought my baby looked yellow earlier, but the nurse didn’t mention it so she wasn’t tested until the 36-hour mark. The levels were high with the non-invasive forehead reading, so they had to draw her blood to get a more accurate reading, meaning more heel pricks. Her bilirubin level was high enough that her doctor prescribed treatment under the bili lights that would help her body break down the bilirubin so it could be excreted in her poo.

The lights were effective, but it was the saddest thing. She had to wear a little mask, and it kept slipping off. She also couldn’t be swaddled – had to just be in a diaper under the lights. Thankfully she was able to sleep even without the swaddle, and the nurses told us we were very lucky since many babies just can’t. Our nurse the first night was so caring and rolled up receiving blankets to create a nest around our baby so she could feel somewhat secure even without the swaddle. I was very grateful for her extra care.

The next morning another amazing nurse found us a new mask and fit it onto our baby so that it stayed much better. She also explained that it was OK if it wasn’t perfectly tight, since our baby’s eyes were closed mostly and she would need to have her eyes uncovered, open and fully stare into the blue lights for several minutes before any damage would be done. That was good to know since the first night I’d slept so fitfully, checking the mask constantly and worrying about protecting her eyes.

We were vigilant about using the lights, and even when I’d feed her I’d pull the light over both of us. The pediatrician said the light we were using was new – one light able to do the job of two of the older versions and he’d never seen the new version before. If it had been possible I’d have turned the whole room into a giant bili light! I’m glad Woman’s had the latest technology to speed the treatment.

Gradually her numbers came down, but not quickly enough for us to leave the hospital when we’d expected. We stayed another night, and so she was under the lights for a total of about 36 hours. We took her home after four nights in the hospital, and I made sure she got lots of indoor sunshine to help the bilirubin break down further. Frequent feedings helped too. We had an appointment with her pediatrician the next day and her levels dropped, and a week later had dropped further. After that there were no more bilirubin checks and she has just received regular baby care.

Now at about six weeks of age she is a chubby, non-yellow gorgeous baby girl. We’re so grateful for the considerate care she received while we were at Woman’s Hospital.