The following post was written by Michelle Hainer and Beth Weinhouse for the Parenting.

Jill Berry, a mom in Woodbine, MD, recalls her toddler’s first photo with Santa. “She was fine in line, then hysterical when I handed her over,” Berry recalls. The resulting photo: “a red-faced toddler, a bewildered Santa, and me, on his lap, wearing a ski jacket and an old shirt.” Oh, the memories.

It’s a ritual of the season: taking your child to the mall so he can tell Santa Claus what he wants for Christmas, and scoring an adorable photo of him sitting on the jolly one’s lap. But not all kids are game. Some take one look at the fat old guy with that big white beard…and freak out. 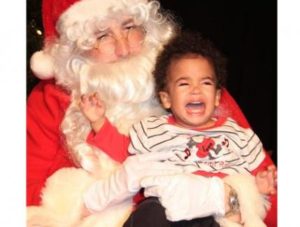 Think about it: This ginormous, hairy guy shows up once a year and you thrust your kid onto his lap, says child psychologist Jonathan Pochyly, Ph.D., of Children’s Memorial Hospital in Chicago. The little guys have no concept that they’re going to get something in return, and the bigger ones think he’s been looking in their windows and compiling a “naughty” list. Of course, some kids do cooperate for the photo op, and yours may be one. Just in case, here’s how to avoid a mall meltdown:

To avoid that stress this year, experienced Santa-snappers suggest you:

To learn from their experience and a few laughs, check out these scared pics with Santa.