When my son, Matthew was a baby, he was a typically developing child. He hit all his physical milestones on time. His speech milestones, however, were delayed. My husband and I noticed he did not babble as much as children his age. He was very social, but would not communicate with us using words. However, even though he wouldn’t speak, he did make known what he wanted from us. I began to worry about Matthew’s speech development at around 15 months, because he was only saying “mama”, “dada”, and “hey”. When Matthew turned 18 months, I spoke with my pediatrician, and was referred to speech therapy.

Our journey with speech therapy began with an evaluation. The speech-language pathologist that evaluated Matthew asked me many questions and interacted with him. When he would not do something for her, she consulted with me to determine if I knew whether he could do the task and was just being shy, or if this was a skill that he was unable to perform. She explained to me that even though she was doing the evaluating, I was the expert in what my child was capable of doing. This made me feel empowered and that we were working together as a team. 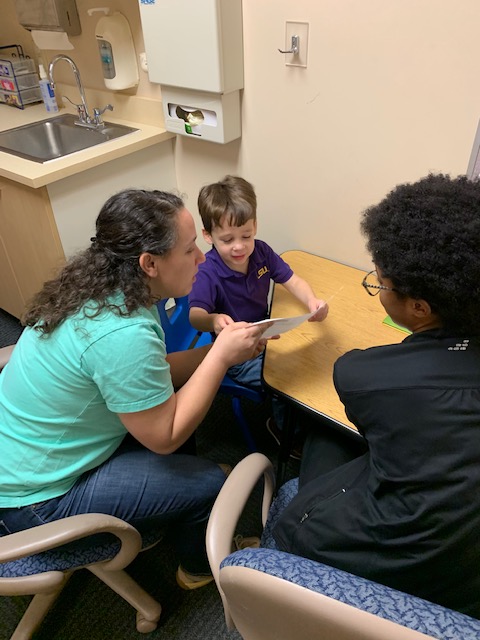 It was recommended that Matthew receive speech therapy services twice a week. I was able to sit in on Matthew’s therapy sessions and participate in his treatment. I was then able to carryover the things that the therapist and Matthew did in therapy during the week at home. Matthew loved coming to therapy because he got to play for 45 minutes! Our therapist taught me children learn through play, and that the play and interaction were structured in a way to get the most responses from Matthew. She also pointed out that his time in therapy is only a snippet of his week, and that the other people in his environment are his full-time therapists!

Of course, Matthew is a typical toddler, and now preschooler! There have been times that he works better with our therapist when I am not actually in the room. When this happens, I have the option to observe therapy from an observation room. I can listen and see what Matthew and his therapist are doing without him realizing I’m there! It’s also interesting to see how he responds to another adult when he’s by himself. His therapist can also communicate with me and point out skills she is working on so that I can work on these at home. The observation room is especially helpful to me at these times, because she can demonstrate what she is talking about right then and there.

Matthew has progressed so much in speech therapy. He is now talking in sentences and has no trouble communicating his needs at home. He still has a way to go with his articulation skills, but he is making progress every session. He’s happier now that he can communicate with us, and it is so much easier for everyone now that he can tell us what he wants or needs. I truly feel that being an active member of his therapy team has greatly assisted with his success. 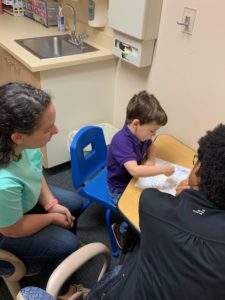 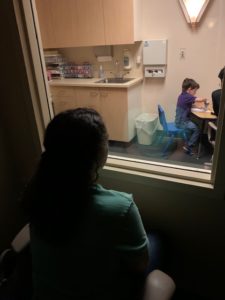