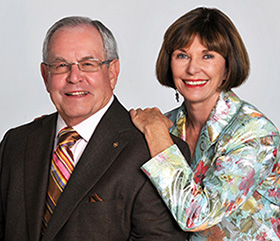 Kathy and Frank McArthur II have huge hearts. True philanthropists, they lead by example, never asking anyone to give without making their own gift first. Their extraordinary philanthropy and volunteer leadership reach across Baton Rouge and nationwide.

Passionate about promoting planned giving, the McArthurs are ardent supporters of Leave a Legacy, a philanthropic marketing program of the National Council of Planned Giving. Frank is particularly proud to have introduced this program to Baton Rouge and to have nurtured its development. They believe strongly that anyone can leave something behind and, by doing so, can make a difference in the lives that follow. Frank and Kathy practice what they preach, making legacy gifts to many organizations throughout the community and beyond, including Woman’s.

The McArthurs have two planned gifts totaling $100,000 intended for Woman’s. Their planned gift will be paid from the proceeds of a life insurance policy held by the Baton Rouge Area Foundation. In recognition of their generosity, the Woman’s surgery waiting area is named in their honor.

Frank and Kathy’s sincerity and enthusiasm are infectious. They give of their time and treasure for the sheer delight of making a difference. That is true philanthropy.